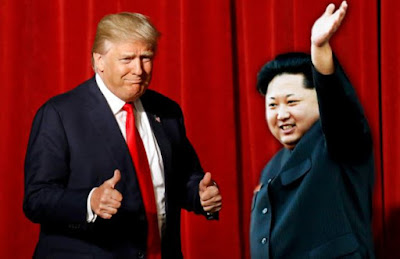 Just a day after calling North Korean leader, Kim Jong-un a 'smart cookie', U.S president, Donald Trump has revealed he'll be honored to meet the Asian leader but under the 'right conditions' as tensions between the U.S and North Korea have reached an all time high.

The U.S has deployed it's Navy warships to the Korean peninsula while Trump also last week said he'll be sending another warship armed with Tomahawk missiles following North Korea's failure last week in a nuclear missile test, but Trump aware that a war could break out any moment between both countries says he's still open to a diplomatic solution.

"Under the right circumstances," Trump said Monday, in a Bloomberg interview.

"If it would be appropriate for me to meet with him, I would absolutely, I would be honored to do it,"
"If it's under the, again, under the right circumstances. But I would do that."

The White House, responding to Trump's statements said even though Trump said he'll like to meet Kim under the 'right circumstances', those circumstances/conditions do not exist at the moment and Kim must end all his nuclear ambitions if he wants diplomacy with the U.S.

White House spokesman Sean Spicer said "those circumstances do not exist now." 'There would have to be significant change for a meeting between President Trump and Kim to be a possibility.

When a reporter questioned Spicer on why Trump would consider it an honor to meet with the North Korean leader, the press secretary said
'Kim is still a head of state."

'Trump is doing everything diplomatically, economically and militarily to stave off the nuclear threat that North Korea poses to the United States.''

In an interview with CBS on Sunday, Trump said he had "no idea" whether Mr Kim was sane.

President Trump, asked what he made of the North Korean leader, told CBS: "People are saying: 'Is he sane?' I have no idea... but he was a young man of 26 or 27... when his father died. He's dealing with obviously very tough people, in particular the generals and others.

"And at a very young age, he was able to assume power. A lot of people, I'm sure, tried to take that power away, whether it was his uncle or anybody else. And he was able to do it. So obviously, he's a pretty smart cookie."