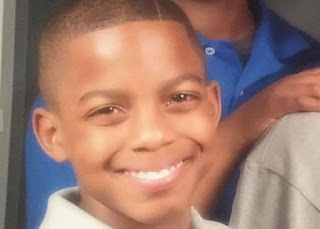 The police officer who shot and killed a 15-year-old African American teenager in a car as he was leaving a party has been fired.

Officer Roy Oliver shot high school freshman Jordan Edwards with a rifle as he sat in a car with his two brothers and two other teenagers while it drove away from a party on Saturday night.

Balch Springs police chief Jonathan Haber said Mr Oliver has been fired for violating department policies in the shooting, but said he could not reveal further details of the policies as the officer can appeal his dismissal. Mr Oliver’s behaviour “did not meet our core values,” he added.

On the night of the incident, police had been called to an address in Dallas, Texas, to investigate a complaint of underage drinking and spotted the car leaving.

Mr Oliver fired at the car as it was driving away, piercing the front side passenger window and hitting Jordan who was sitting in the front seat, his family’s attorneys claim. He was shot in the back of the head as his 16-year-old brother was driving away from the house. 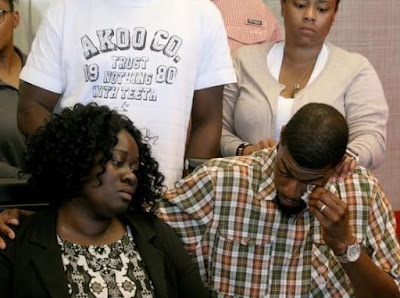 Odell Edwards wipes away tears as he sits with his wife, Charmaine Edwards, listening to their attorney Lee Merritt talking about the death of their son, Jordan (AP)

The teenager’s death has been ruled as a homicide by the Dallas County medical examiner’s office.

In reports immediately following the teenager’s death, police claimed the car had reversed “in an aggressive manner” towards officers.

Mr Haber changed this claim on Monday after video evidence proved the teenagers’ car actually driving away from officers.

Late on Tuesday night the police department released a new statement claiming that officers entering the house on Saturday night heard gunshots being fired during a “chaotic scene with numerous people running away from the location”.

The intersection of Baron and Shepherd Lane near where the shooting of Jordan Edwards by a police officer happened in Balch Springs, Texas (AP)

The statement said that as officers exited the house they saw the teenagers’ vehicle backing out onto a main road and driving away, despite calls for it to stop.

The Edwards family’s attorneys claim witnesses said Jordan and the four people with him decided to leave the party as it started to become unruly, with the sounds of gunfire and police arriving.

Jordan’s brother, who was driving the car as they left the party, described hearing multiple gunshots that were close enough to leave his ears ringing, lawyers said. It took the people in the car a few moments to realise Jordan was slumped over. They could not tell if he had died instantly or not at the time, they added.

The teenager’s friends described him as a good student and popular athlete. His death sparked outrage on social media, with thousands of Facebook and Twitter users posting about the shooting. Some compared the case to the deaths of other young African American men at the hands of police, such as 12-year-old Tamir Rice who was shot in 2014 as he held a pellet gun.

Jordan’s family has called for the officer to face criminal charges.

In a statement released on Tuesday, the family called for other officers who “extended this nightmare for those children” to face disciplinary action.

“Our family is working hard to deal with both the loss of our beloved Jordan and the lingering trauma it has caused our boys,” the family said.

An attorney acting for Mr Oliver said he is not commenting on the cast it this time as the shooting “was recent and still being investigated”.

“Everyone should wait until the facts come out and we know more,” Cindy Stormer told Dallas Morning News.

A vigil for Jordan has been held the Mesquite High School, where he was a first-year football player.