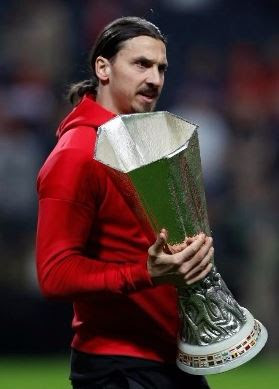 A Manchester United fan had a creative way to persuade Zlatan Ibrahimovic to stay.

He held a banner that insinuated that Ibrahimovic could have SEX with his wife if he stays at the club.

The cheeky banner begged the veteran Swede to stay at the club. It read: “Zlatan, stay and can sh@g my wife”, with a picture of the Swedish striker celebrating one of his many goals for the Red Devils this season.
Zlatan’s future is still in doubt with the 35-year-old recovering from a knee injury sustained in the semi-final of this competition against Anderlecht at Old Trafford.

His current contract runs out this summer and he is yet to sign a new deal. The striker is set to be out with his injury for months yet and United fans are waiting to see whether he stays after a successful first season in the Premier League. The former Barcelona and Inter has another year’s extension to his contract already on the table. 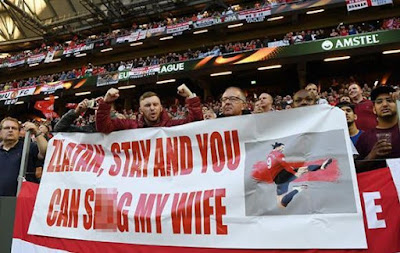