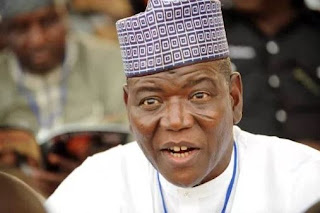 Sunday, the Kano state Police command arrested a former governor of Jigawa state, Sule Lamido, for allegedly inciting some of his supporters to plan towards disrupting the conduct of July 1st local government elections being organised by the incumbent Jigawa state governor, Muhammad Badaru.

In a statement released Monday evening, PDP says the arrest of the former governor is an indication that our democracy has nosedived. Read the statement after the cut...

The attention of leadership of the Peoples Democratic Party (PDP) under Senator Ahmed Makarfi, CON, has once again been drawn to the unwarranted arrest and detention of the Former Governor of Jigawa State, Alh. (Dr.) Sule Lamido by men of the Nigerian Police Force (NPF) in Kano State. This is outrageous and anti-democratic.

2. Dr. Lamido was arrested and detained on Sunday, April 30, 2017 on the frivolous allegation of 'inciting the public'.

3. The true reason for his arrest however, has to do with the forthcoming Local Government Elections in Jigawa State. The long incarceration of former Governor Gabriel Suswan is also linked to the forthcoming LGA Elections in Benue State. The APC led Administration is fast loosing the confidence of the people because of its non-performance, high handedness and lack of empathy for the suffering of the people. The only option left for it is to prevent the opposition from effectively campaigning and mobilizing the people for the Elections. The whole strategy of the failed APC Government is founded on the assumption that if there is no opposition, then they cannot be defeated. Hence the intimidation, harassment and incarceration of popular opposition leaders like Sule Lamido. We are aware that, we in the opposition will be in for a hard time in the Run-up to the 2019 General Elections with more arrests and intimidation of our prominent leaders.

4. For the record, President Muhammadu Buhari before the 2011 General Elections made several inciting statements against the rigging of the elections with grave consequences thereafter. He was never arrested nor detained.

5. Nigerians cannot also forget some inciting statements credited to President Buhari ahead of the 2015 General Elections. Especially, General Buhari while addressing Congress for Progressive Change (CPC) members in Niger State incited his audience in Hausa language that translates thus, “...If what happened in 2011 should again happen in 2015, by the grace of God, the dog and the baboon would all be soaked in blood.’’ For this statement and others as well, he was never invited, arrested or detained by any of the security agencies under the PDP Administration. It was not a sign of weakness by the PDP led Government. It was in deference to freedom of speech, democracy and peace.

6. The APC has today unleashed the Nigerian Police, the DSS and the EFCC to harass and intimidate Court Judges, opposition leaders, social media influencers/bloggers and other Nigerians that speaks against the APC led federal or state governments on fabricated charges just to cow them. Gov Lamido merely asked the people to defend their votes against rigging. How is that a crime? If you are not planning to steal the peoples' votes, why should you be afraid if the people are advised to defend their votes? Of course, no thief would want the owner to guide his house against burglary.

7. The excesses of the security agencies has now reached alarming proportions. If they must be reminded, their mandate is to defend all Nigerians and not to act as a willing instrument of oppression of the people by the authocratic APC Government.

8. We are therefore calling on the security agencies in the Country to release unconditionally, Gov Sule Lamido, the Former Governor of Benue State, Gabriel Suswam, Former Governor of Niger State, Dr. Babangida Aliyu, and all other political detainees in their custody. We are in a democracy and not a Gestapo State.

9. We want to also use this opportunity to invite members of the international community to call the APC government particularly the overexcited and autocratic APC Governors to order. They are the ones who are instigating the lawlessness as we saw in Kogi, Niger, Benue and now Jigawa State. If this ugly trend is not stopped forthwith, it may lead to breach of peace and public disorder. The APC leaders and Governors should be held responsible for whatever is the outcome of this continuous intimidation of opposition members in the Country.