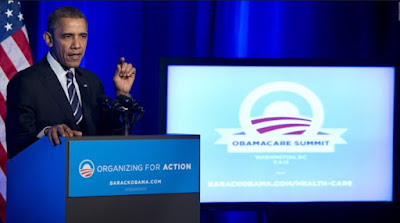 President Donald Trump has finally won. The House today voted to repeal and replace the Affordable Care Act, also known as the ObamaCare. Read the report from CNN below...

The bill now heads to the Senate where it faces daunting challenges because of the same ideological splits between conservative and moderate Republicans that nearly killed it in the House.

Trump said he is confident the bill will pass the Senate, calling Obamacare "essentially dead."
"This is a great plan. I actually think it will get even better. This is a repeal and replace of Obamacare.

Make no mistake about it," Trump said at a celebratory White House appearance with House Republicans.

After a dramatic week of negotiations, lobbying from Trump and Republican leaders, the vote ended with 217 GOP lawmakers backing the measure. Twenty Republicans opposed it, as did all House Democrats.

Democrats were unable to stop the GOP vote aimed at President Barack Obama's signature legislative achievement. But after the final vote was cast, they chanted "nah nah nah nah hey hey hey goodbye" to their Republican colleagues, with a few members waving, as they believe the vote will lead to many GOP lawmakers losing their seats in the November 2018 midterms.

Thursday marks a political milestone -- one that has painfully eluded Trump and House leaders for months. The controversial health care bill delivered Trump the biggest political defeat of his short presidency in March, when the legislation had to be yanked from the House floor because it simply didn't have enough support.