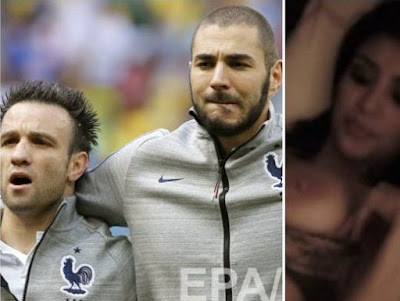 Karim Benzema has torn into Mathieu Valbuena, accusing his former France team-mate for continuing to tell lie in the aftermath of the sex tape scandal that froze both men out of the national team. The Real Madrid striker, who remains in the international wilderness, said Valbuena's 'lies' are 'making him mad' and that his reputation has been dragged through the mud.

Benzema was excluded from France's European Championship squad last year and hasn't played for the national team since after being charged for an alleged attempt to blackmail Valbuena over a sex tape that was leaked to certain individuals in 2015.

In December, a court in Versailles rejected Benzema's appeal to stop the trial and the affair has rumbled on since Benzema was first charged with conspiracy to blackmail back in November 2015.

Now, speaking to French newspaper L'Equipe, a frustrated Benzema has hit out at Valbuena, who has taken trouble not to speak about the affair.

Benzema said: 'There's really something wrong with him... it's all part of his story.

'When I hear him say that he's ready to play with me again. To hear him at the beginning, I'm scum, I threatened him, I scared him, all you can invent... And now he wants to play with me!
'He said he would not have lodged a complaint if he knew I was involved in the story.
'For more than a year-and-a-half I'm his worst enemy, a bad guy, a thug, I have to be punished, dragged in the mud, my name and that of my family, in the dirt.'

The Real Madrid man also said he has not seen close friend Karim Zenati, who was also allegedly involved in the plot, since the scandal began.

Benzema said: 'It has been almost two years since I was forbidden to see my best friend, if we do we go to prison, and he is quiet, but he must stop this crap, and I do not know why he keeps talking about me already.'

On Valbuena, he said: 'I am his enemy, I wanted to take money from him - he really has to stop inventing, it makes me mad he keeps on lying!

'Sex tape? He just had to tell the truth about what really happened.'

Valbuena on his on side said that he was 'deeply disappointed' someone he considered a friend and trusted team-mate might be involved in the alleged plot.

The Lyon player, 32, has kept his counsel since then as police built a case based partly on recording of phone conversations between the alleged blackmailers.