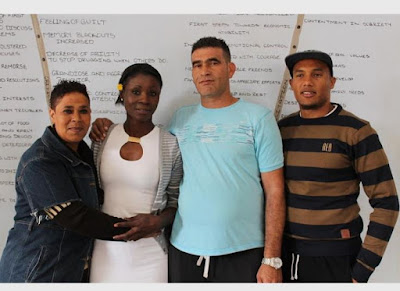 In 2010, Valerie Madondo (second from left) from Zimbabwe crossed the South African border in search of employment. She hoped to earn enough to provide for her infant boys. But her journey took a harrowing turn for the worse after she was sold to Nigerian men by South African women in Rosettenville.

Valerie, now 29, was held captive by these men for six years. Speaking to the CHRONICLE, Valerie shares how she was trafficked in 2010, drugged, abused, sold as a prostitute, locked up, held hostage and raped countless times.

“I came here looking for a job and worked in Pretoria for a while. I trusted some women who said they had a job interview for me. Little did I know that I was being sold to Nigerians for money,” said Valerie.

“I was drugged and abused. I didn’t know where I was and I was often locked up like a hostage. I was raped and I didn’t have any choices in my life while I was a prisoner under these Nigerian monsters.

And yes, I tried to escape many times from the Rosettenville area, but I was on so many different drugs that the men would eventually find me as I would not make it very far. I could not escape,”At this point Valerie was homeless and without money. She received barely enough food for survival, and whatever money she made from the prostitution she was forced into was taken away from her.

“At one point I was arrested. It was around 2014. I was arrested for selling drugs, drugs that I was very much hooked on and craved more than anything else because it was forced into my system. I watched as my kidnappers bailed me out and bribed the police to have me released. I feared all Nigerians and I still do when I see one,” she recalled.

When all hope seemed lost, the Moffatt View Police conducted a house-to-house inspection on November 28, 2016, in Rosettenville and rescued many young women. Valerie was one of them. She was taken in by the police after she cried out for help and was immediately taken to the REC Wellness Centre in Robertsham (Recovery Life Institute)

After her examination it was evident that Valerie had lost a lot of weight in the six years that she was held captive. She is now HIV-positive. Shenaaz from the centre said that Valerie has been doing great work while under their care. 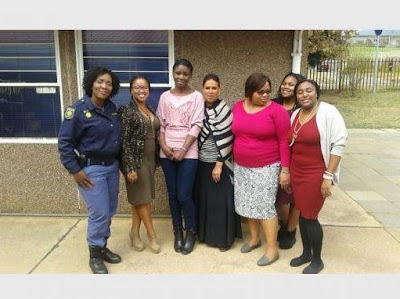 "We took Valerie in and since then she has never gone far off or left the premises. She has had no relapse and she has been doing well in dealing with all the problems she now faces," said Shenaaz.Moffat View SAPS also commented, saying that on December 1, 2016, during the 16 Days of Activism, the Moffat View SAPS Women’s Network, social crime prevention and communications units visited the brothels and spoke with the ladies found on that night.

"Two ladies were rescued at Berg Street. One was taken back home to Soweto and the other one was taken to rehab at Robertsham. It was earlier in April that the women’s network raised funds so that Valerie can go back home to Zimbabwe. A while later we were visited by Shenaaz and Valerie, who came to thank the management for what the station did,’’ said Constable Mikateko Rebecca Bila, communications officer at Moffat View SAPS"

"I am grateful for all the fundraisers that were held to help get me back home. I got all my papers in order with the help of the Centre and I now have my ticket to go home to Zimbabwe. I am very excited,” said Valerie.

Valerie’s bus left from Park Station at 2pm on Tuesday May 9. The centre thanks the Moffat View Police for the fundraisers and drives held to raise money for clothes and toiletries etc. for Valerie.