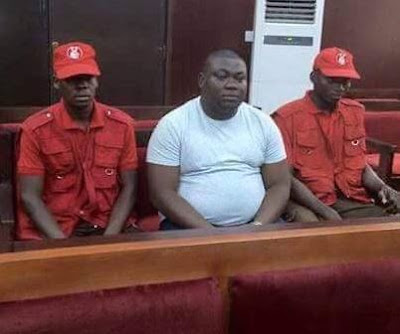 After it was learnt that Barr. Alabh George Turnah was arrested by the EFCC, youths gathered themselves and stormed the EFCC office to protest, describing Turnah's arrest as an act of injustice, saying he is a good man with a good heart. They stayed there singing demanding his unconditional release.

The EFCC South-South ZONAL head, Ishaq SALIHU, instead of pushing away the protesters, called them together and began to educate them.
These were his words:

" If I tell you all how this young man has contributed to the under development of your region, you youths you will be ashamed to be here. I believe George has so much to tell why EFCC is after him, now let me ask you,

1. Did George tell you that EFCC is after him because they found billions of naira in one Eluantaziba George ACCOUNT?, this is the account of his five years old daughter.

2. Did he also reveal to you all that huge sums of money amounting to billions were discovered in the accounts of the following companies owned by him without any traceable office except one or two?

3. Did he Tell you that the NDDC have furnished EFCC with details of his salaries and allowances while he served as SA to two MD's which was not even upto #30M?

4. Did he reveal to you that he collected a contract for the building of Ogbia Brotherhood village, which was awarded to one of his companies and money was paid in full, which he converted to mere renovation of the hall?

5. Did he reveal to you that in 2014, huge money running to billions was awarded to him for the organisation of a programme tagged 'Niger Delta peace carnival' a programme meant for the whole of Niger Delta was then converted into 'Goodluck Jonathan Cup for Ogbia Youths only' and then embezzled the funds?

6. Did he reveal that the EFCC have showed him various incriminating document from NDDC, detailing programs which he had collected funds for in the name of Niger Delta Youths running into billions, for programs which never held?

6. Did he tell you that he collected many funds to bring light to most of your communities in Ogbia? Do you have light? Did he revealed that the Kolo to Ogbia Electrification project awarded to one of his company was abandoned even when full payment has been made?

7. DID HE TELL YOU THAT THE NIGER DELTA VOLUNTEER PROGRAM DESIGNED TO EMPOWER 2000 YOUTHS OF THE REGION FOR 4 YEARS WITH A STIPEND OF 150K PER BENEFICIARY, THAT HE PAID 70K EACH, please multiply 80 by 2000, it will amount to #160,000,000 every month, which he was receiving for four years, amounting to about #7.6BN ? Now, we are still investigating if at all he employed the said 2,000 youths

These and many more facts we have in our possession, as time progresses, more will be revealed. Now i ask you, do you still think he was really a good man with a good heart?

Do you still think his intentions for ogbia people were good?

Do you think he is worth protesting for?

Because he gives you crumb from the billions he has stolen, is that enough to call him a good man?

Have you all pondered and ask yourself if Ogbia or the Youths would have been the same way it is now, if only he spent half of the money?

Next time before you join this kind of protest, ask yourself what his sources of income is as compared to his flamboyant life.

I will leave your conscience to communicate with you".

Immediately the EFCC south-south head ended his speech, the protesters were all cold, they could not utter a word again, one by one, they started dropping their placards, and before you know it, even his close associates who were all there, were shocked at the revelations, they too threw away their placards, everybody went back home.