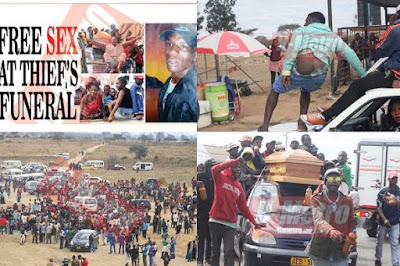 Free sex was offered at a funeral in Zimbabwe on Monday and Tuesday night as prostitutes shocked sympathizers at the burial of a serial thief by offering free sex to all mourners.

They described the late thief who died of tuberculosis as a sex maniac. H-Metro, reports that the infamous thief identified as Masiyas Mesiyas is allegedly the one who stole Jamaican artiste Elephant Man’s cellphone when he came into the country a few years ago.

“Mesiyas was a well-known thief but one of the things we have known him for as sex workers in Mbare is that he loved sex and was our regular client...
We had no money to contribute in planning the funeral arrangements, but we offered what we know best and male mourners who came for the funeral could get sex for free,” said one of the hookers who identified herself as Busi.Brandon Chikukwa, a relative of the deceased confirmed the incident.
“I have never seen anything like what I witnessed on Monday night when my uncle died.
.
People were celebrating his life in different ways, as they were having sex in cars and at night, people would just go anywhere private and start having sex. The service was being offered by the prostitutes for free to everyone who attended, we just hope they were wearing condoms.

As a family we do not condone what was happening but there was nothing we could do because he was a people’s person. They were doing what they thought was best to pay their last respects to him,” said Chikukwa.