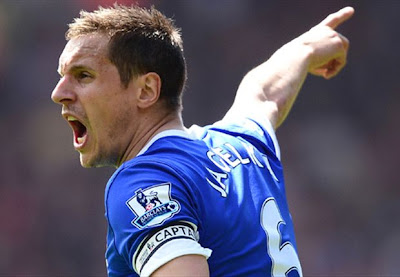 The Scottish manager is set to leave Goodison Park in the summer in order to take over at Manchester United, and the captain is determined to his fine work.


Everton defender Phil Jagielka has urged his teammates to do the outgoing David Moyes proud by building on the foundations he has put in place at the club.

The Scottish boss announced on Thursday that he would be leaving the club after 11 years in order to replace the retiring Sir Alex Ferguson at Manchester United, where he has agreed to a six-year contract.

Jagielka paid tribute to the man who brought him to Goodison Park seven years ago and believes that the players must now endeavor to continue all the Scot’s fine work.

"Like the rest of the squad I have nothing but the highest regard for David Moyes," the defender told the club's official . "He is a first class operator on and off the ground and on behalf of the players I would like to place on record my thanks for the work he has done improving the team.

"It was as much of a shock to the dressing room as I'm sure it was to Everton and our fans.

"All the lads wish him the very best for the future but we still have two important Premier League games to play and all our attentions will be focused on winning against West Ham and at Chelsea.

"Once the season is over we can collectively look forward in order to ensure we continue to build on the positive work of the past few seasons."