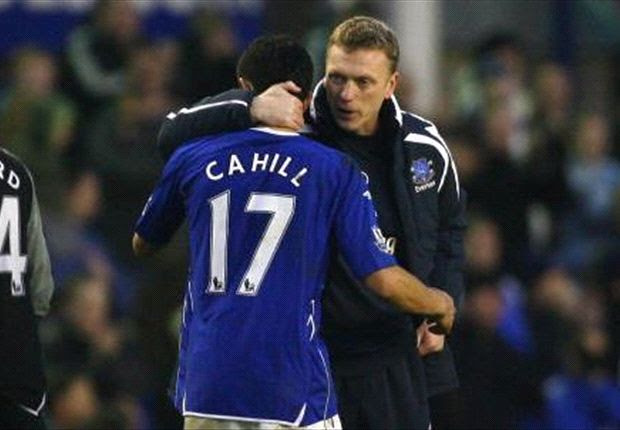 The former Everton star held high praise for the incoming Manchester United coach for whom he played for eight seasons at Goodison Park.

The New York Red Bulls Designated Player starred at Everton from 2004-2012 under Moyes' guidance, developing a tight bond with the coach, who he said is a perfect candidate to take the torch at Old Trafford.


"I'm so happy for him and his family," Cahill said. "I think for the whole of what he's done in football in general, he deserves it.

"It's amazing. He's done so much in the game, and to be rewarded to have the opportunity at the start of his journey to go to one of the biggest clubs in the world and try to do something special and winning something and continuing their level of success is the mark of the stature of a man he is and how much they respect him as a football manager."

Cahill thrived under Moyes at Goodison Park, appearing 278 times and scoring 68 goals, and still maintains a strong passion for the club. He grew close with Moyes on and off the field, and he conceded that it is a sad time for the Toffees to lose a manager of Moyes' stature.

"I think to [Everton] players, to the fans, everything really, he epitomizes the club," Cahill said. "I don't think there's a time that he never treated any player like his son and the fans like his friends. He was so approachable, had time for everyone, made time for anyone and it cared so much to him that his job was a 6-9 job. It basically took over his life, and that's what it means to you when you join a club like Everton.

"My experiences when he signed me and my relationship, he was like a father figure. He wasn't someone that always needed to praise you, but got the best out of you on and off the park. Always concerned for the welfare of my family, the welfare of my livelihood and also my football."

As for how Moyes will fare with Manchester United, Cahill has no qualms about the future success the Scot will have in filling Ferguson's hallowed shoes, and the Australian international feels that the Red Devils went about their hire the right way instead of going after bigger, more high-maintenance names.

"I think you look at two different elements of the management of Manchester United," Cahill said. "Do you want that manager that's been at the top level and bounced around the European clubs, bringing all his own staff in changing the footprint of what Manchester United is all about and maybe the caliber of players breaking wage structures even more, signing the big superstars? Or maintaining somebody that respects the club, respects the production of what they're doing, understanding the budget, coming the way David Moyes did having his 10-11 years experience at Everton, proving and outweighing any manager in finishing in the top six nearly every other year, fourth in the first year, always knocking at the door but not really having the budget to take him to the next level?"

If Moyes is to struggle at all from the start of his six-year contract with the club, the groans and criticisms of his hiring are likely to grow, but Cahill has preached patience, while also stating that there are two men capable of taking over from Ferguson: Pep Guardiola and Moyes.

"It's the biggest job in the world, and they're going to demand things straightaway," Cahill said. "The class of the players is already there, and the class of what they have and what they're probably going to bring in, you look at any other manager in the world who's suited for the job. I think other than Pep Guardiola there's only one man on the list, and that's David Moyes that would suit a club like Manchester United."

Cahill also said that Moyes' eye for talent is sharp, evidenced by the manager's signing the likes of Phil Jagielka, Leighton Baines, Tim Howard and Joleon Lescott, among others. The added allure of playing for Manchester United will aid in Moyes' ability to attract top talent and Cahill believes he will continue to get the most out of the talent he has at his disposal.

"Being a player under his reign, it was always trying to get the best from your abilities," Cahill said. "None of us were really worldbeaters as in some of the stature of players on the world stage now, but what we had was an understanding of the club, and understanding of David Moyes. It's not just about wearing the shirt but wearing the shirt with pride and pouring your heart out for the club.

"If I know David Moyes, he's a very strong character, and he is somebody that is going to want to do things his way and obviously stay within the guidelines, but at the same really put his footprint on the club as someone who is very determined in winning something and doing something special with Man United.

"There's no one that I think deserved the job more than him."