Home Football Mourinho return to Chelsea 'would be a great thing,' says Lampard

Mourinho return to Chelsea 'would be a great thing,' says Lampard 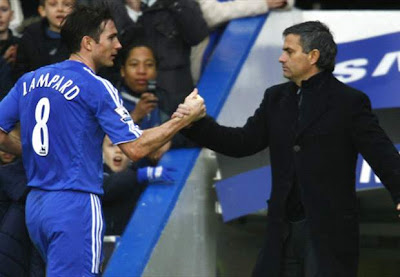 The Real Madrid boss - who won two Premier League titles at Stamford Bridge - is widely thought to have agreed to return to London at the end of the season.
Chelsea midfielder Frank Lampard says a possible return of Jose Mourinho to Stamford Bridge would be "great" for the club.

The Real Madrid boss is widely expected to leave Santiago Bernabeu at the end of the season in favor of a second spell at the West London side.

Mourinho led Chelsea to a first-ever Premier League title during his first season in charge at the club in 2004-05, before retaining it the following term, and Lampard is keen for the Portuguese to return.

"I think it would be a great thing for the club, I think he is a fantastic manager," Lampard told BBC Sport. "I've seen speculation before and a completely different manager walks through the door so we never know on that front, but he is certainly one of the greatest managers, if not the greatest, in world football, so I'm sure the club and the fans will be happy to have him."