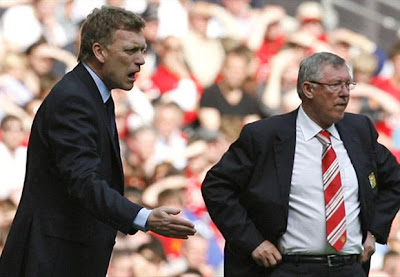 Everton manager David Moyes will take over for Sir Alex Ferguson at Manchester United at the end of the Premier League season.

A day after the shocking announcement of Ferguson's retirement, the Toffees' boss has been identified as the successor to the most successful manager in English soccer history. He has signed a six-year deal.

“I know how hard it will be to follow the best manager ever, but the opportunity to manage Manchester United isn’t something that comes around very often and I’m really looking forward to taking up the post next season," Moyes said in a statement.

Moyes will coach Everton's final two games - against West Ham and Chelsea - before moving to Manchester United on July 1. Everton officials will start the search for a new manager immediately, but it won't be easy replacing a club legend.

With a much smaller than European powerhouses like Manchester United, Moyes has coached more than 500 games for Everton and led the club in four European campaigns in 12 seasons.


"The chairman, on behalf of the club, would like to place on record his thanks to David for the massive contribution he has made to Everton since his arrival in March 2002," Everton said in a statement. "He has been an outstanding manager."

Moyes replaces Ferguson, who will leave Manchester United after guiding the club to its 20th league title this season and move upstairs to become a director and ambassador. Ferguson was involved in the process of bringing Moyes to Manchester and among the board that unanimously agreed to make the hire.

“It’s a great honor to be asked to be the next manager of Manchester United. I am delighted that Sir Alex saw fit to recommend me ," Moyes said. "I have great respect for everything he has done and for the football club."

Ferguson took charge of United in 1986 and enjoyed a trophy-filled 27 years at the club. United has won the Premier League title 13 times and celebrated the Champions League title in 1999 and 2008.

Ferguson's final match will be against West Brom on May 19, which will mark his 1,500th game in charge of United.

"The decision to retire is one that I have thought a great deal about and one that I have not taken lightly," he said. "It is the right time. It was important to me to leave an organization in the strongest possible shape and I believe I have done so."