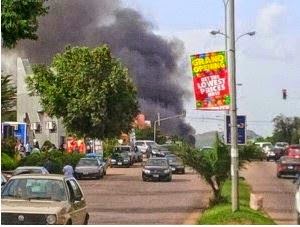 If not for the timely intervention of security agents, another bomb would have exploded at EMAB Plaza shortly after Wednesday’s bomb blast in Abuja.

Coordinator of the National Information Centre (NIC), Mike Omeri told journalists on Friday that their prompt action, hours ago, led to the arrest of one of the attackers and the killing of another that was on ground waiting to detonate the second and possibly the third deadly device.

Debunking insinuations that the CCTV cameras installed in some areas in the Federal Capital Territory were not in use, he insisted that Minister of the FCT, Senator Bala Mohammed informed him that the cameras were functioning and that more are to be installed.

“While we do not want to go into details of operations currently taking place, it is advised that the practice in which some persons just bandied figures of casualties on either the side of the military or insurgents should be discouraged and checked. The truth remains that the military is winning the war and the nation shall surely triumph in this fight,” he declared.

He also urged Nigerians especially parents and school pupils to ignore messages on the social media that some schools were being targeted for attack and assured that security agencies were working assiduously to ensure that schools are safe and academic activities remain unhindered.