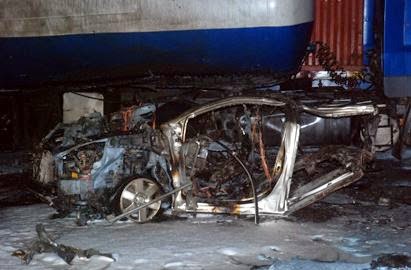 The ever busy Creek Road in Apapa, Lagos was thrown into pandemonium on Wednesday night after an explosives-laden car blew up at Folawiyo Fuel Depot.

Vanguard gathered that the explosion occurred at about 8:30pm; affecting four buildings, including two banks.

At press time,  it was gathered that no fewer than four people were feared killed in the blast.

An eyewitness, Musa Ali, told Vanguard he narrowly escaped death during the blast.

Just today, there was a bomb blast in Adamawa market, Emab plaza, Abuja and now oil tank farm in Lagos.

...Nigeria is no more safe... It is better to seek an asylum and leave this country to stay alive