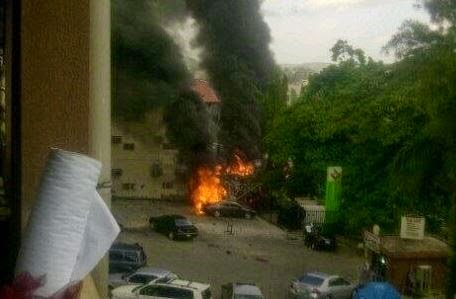 Tension is high in the Nigerian capital city, Abuja after a bomb explosion hit Emab plaza which is very close to the popular Banex plaza.

An eye-withness told Dailpost that the explosion is so serious and was capable of causing many deaths. The level of casualty has not been ascertained at the moment.

A source said the blast shook the entire Wuse 2, hence there will definitely be casualties. She said “The blast was so heavy that it shook our plaza. I know many will be affected, but my friends and family members who work at the plaza have confirmed that they are safe.
Wuse 2 is a strategic business area that houses many plazas and clubs in Abuja.

Speaking with popular Abuja event consultant, Yankytech at the scene of the blast, he said his shop and staff were safe, but many people died in the blast. He said ” you can see obviously that casualty figure is high. There is no way a blast could go off at Banex that there won’t be casualty. What we are waiting for now is to confirm casualty figure.

Also speaking with DailyPost. Wale Akanni said, “the evil people have struck again. Penetrating into the heart of Abuja, the popular Wuse 2 is something we cannot really imagine.

Chioma ononiwu, the owner of Red Polish also told DailyPost that the sound of the blast sent shop owners at her Plaza which is few kilometres away from Baanex running helter skelter. She said “the blast was very heavy, and definitely a bomb.”