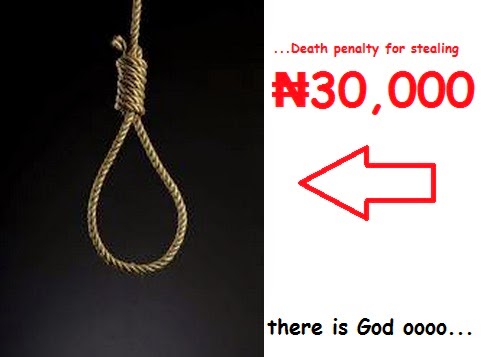 Nigeria is a country that favours shady rich men and criminalistic politicians who rip all average Nigerians of their possession, suck us dry of our resources and lavish money in buying expensive private jets and mansions abroad. A common man will get death sentence for stealing pepper but a politician will get 2 weeks detention for stealing billions. May God help us all...

A student of Delta State Polytechnic, Eguono Akpeghughu, has been sentenced to death by hanging by a Warri High Court in Delta State, Nigeria for armed robbery.
PMNEWS reports that Akpeghughu was found guilty on a two-count charge of conspiracy to commit armed robbery and armed robbery after he was alleged to have robbed his victim of cash and other valuables worth over N30, 000.

According to the police prosecutor, the offences are punishable under section 1(2) (a) of the Robbery and Firearms (Special Provisions) Act, Cap R 11 Volume 14, Laws of the Federation of Nigeria, 2004.

The court held that the prosecution proved essential ingredients of armed robbery against the accused beyond all reasonable doubt from the totality of evidence presented before the court.

The court further held that prosecution was able to pin the accused to the scene of crime from the evidence of Prosecution Witness 1, the testimony of a witness who assisted in arresting the accused as well of his confessional statement and other exhibits recovered from him including the wrist watch of the victim which were all tendered and admitted in evidence by the court.

It was informed that the accused was arrested with the help of a passerby when the victim summoned up courage and grabbed the accused as he attempted to escape with his loot and raised alarm while his other gang members escaped.

After thorough investigation by the police, it was discovered that the accused, suspected to be a member of an armed gang terrorising the neighbourhood especially pedestrians, lives very close to the scene of crime.

He was later handed over to the police where he voluntarily made a confessional statement admitting to the crime.